The Town of North Rustico has been selected as the 2015 recipient of the Murray Pinchuk Community Builder Award for the Town’s work on Seawalk Park.

The Award will be presented at the Town Office located at 106 Riverside Drive on Friday, November 6th at 11:00 am to celebrate World Town Planning Day on November 8th. Planners in 30 countries mark this day by talking to community or student groups, or sponsoring activities that highlight the importance of planning in their community.

The Murray Pinchuk Community Builder Award is a local award presented by the Prince Edward Island Association of Planners to recognize an individual, group or organization that has through their outstanding volunteerism or exemplary action demonstrated an extraordinary commitment to making their community a better place today and for the future.

The North Rustico submission was recognized for positively impacting the built environment by creating a people place that provides attractions for local residents and visitors alike. The new Welcome Centre for tourists is complemented by providing a venue for local artisans to display their work in an environment that is fully accessible to everyone. The area is further complemented by relocating playground equipment to one central location in the park. The planning community recognizes that this project has something for everyone in the community and brings people together in a manner that takes advantage of their natural environment through good design.

The attached photograph was taken at an event called music in the park on July 29th, 2015 which illustrates how all of the planning elements come together to make Seawalk Park a worthy recipient of this year’s award. 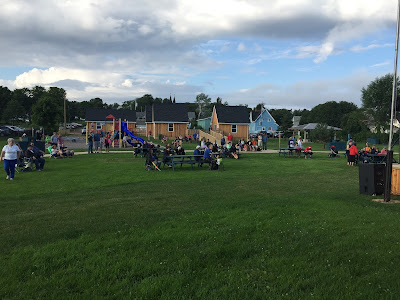 Media are invited to attend.

The PEI Association of Planners is now seeking nominations for the 2015 Pinchuk Community Builder Award.

The Murray Pinchuk Community Builder Award is an award offered by the PEI Association of Planners to recognize an individual, group or organization that has, through their outstanding volunteerism or exemplary action, demonstrated an extraordinary commitment to making their Prince Edward Island community a better place today and for the future in a way that touches on either the built or natural environment.

This may include life-long service, excellence in site design, innovative or accessible planning method or technique, promoting land use planning in their community, or any other exemplary achievement enhancing the interaction between people and their environment.

The Pinchuk Community Builder Award recognizes the highest standard of community building excellence in the public and private realms. The award will be presented on November 8th, World Town Planning Day.

Individuals, groups or organizations may be nominated by members of the PEI Association of Planners or the public.

To nominate a candidate, the nominator should complete a nomination form describing the efforts and achievements of the nominee. Self-nominations are permitted.

Recipients will be selected by the Association. Nominations shall be valid for one year after submission, during which time the nominee may be selected to be recognized. The award recipient will be presented with a certificate from PEI Association of Planners.

Eligible nominees may include:


Individuals must have demonstrated community involvement for a minimum of 2 years.

Completed nomination forms (link) must be received by October 1. Questions can be sent to the PEI Association of Planners.
Posted at 5:52 PM 1 comment: