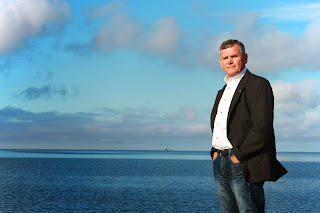 The PEI Association of Planners today announced the winner of the first annual Murray Pinchuk Community Builder Award, in conjunction with World Town Planning Day. Peter Brown, president and principle of the Bayside Group, has been named the 2013 Community Builder.  Mr. Brown has a passion for creating a livable community with a focus on downtown redevelopments. His vision and projects have included residential housing for all age groups and incomes as well as commercial spaces for local retail needs. Mr. Brown is a volunteer member of the City of Summerside Official Plan working group, providing valuable input, leadership and guidance to the committee’s work.

"For the inaugural award, the Association invited the City of Summerside, the late Mr. Pinchuk's employer, to nominate a deserving group or individual to receive the award and we are very pleased to be able to launch the annual Pinchuk Community Builder Awards by recognizing Mr. Brown’s efforts towards building community vibrancy," said Samantha Murphy, president of the PEI Association of Planners. "This award is a testament to all who seek to make the built and natural environment better for the community as a whole.”

The award was established this year in honour of the late Murray Pinchuk, a member of the Association, friend, and motivator. “Murray was an inspiration to us all with his humble and joyful demeanor,” said award winner, Peter Brown. “His twinkle and sarcasm blended made him unpredictable and fun.”


Mr. Brown and his company Bayside Builders have been constructing homes and cottages throughout Prince Edward Island for over 20 years, and are a recognized leader in the construction and property development field.  Mr. Brown has an extensive portfolio of projects in Summerside, to highlight a few: the Suites on St Stephen condominium development, renovations to the 50-bed Parkhill Place community Care Facility, Harbour Terrace Condominiums, the lofts at 359 Water Street, multi-unit townhouses and small affordable starter homes on Jennifer Street, multi-unit seniors’ garden townhouses on Pope Road, small tot park on Jennifer Street, and the Hub student apartments downtown (under construction).


The Murray Pinchuk Community Builder Award is a new award being offered by the PEI Association of Planners to recognize an individual, group, or organization that has, through their outstanding volunteerism or exemplary action, demonstrated an extraordinary commitment to making their Prince Edward Island community a better place today and for the future in a way that touches on either the built or natural environment.

This may include life-long service, innovative or accessible site design, promoting land use planning in their community, or any other exemplary achievement enhancing the interaction between people and their environment. The Pinchuk Community Builder Award recognizes the highest standard of Community building excellence in the public and private realms.

Earlier this year, the Association was deeply saddened to learn that we had lost an active contributor to the promotion of planning in PEI. Murray Pinchuk passed away in June, and the branch has spent the past several months looking for an appropriate way to recognize his efforts. 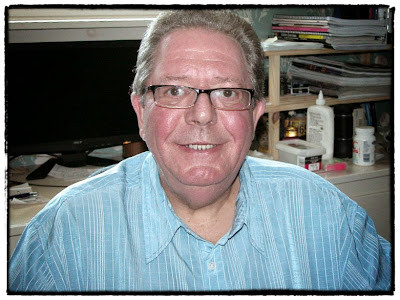 In October, a memorial tree was planted in front of City Hall in Summerside, where Murray worked for many years. 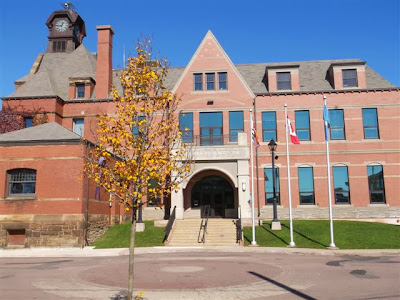 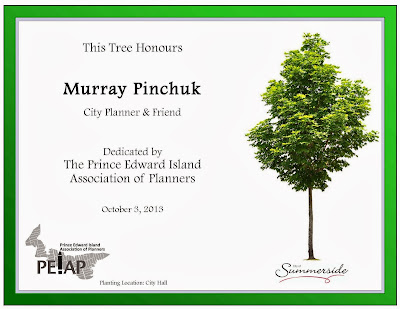 On Friday, in honour of Murray's memory and World Town Planning Day, the first annual Murray Pinchuk Community Builder Award will be announced. Stay tuned for more information.
Posted at 11:47 AM 1 comment: 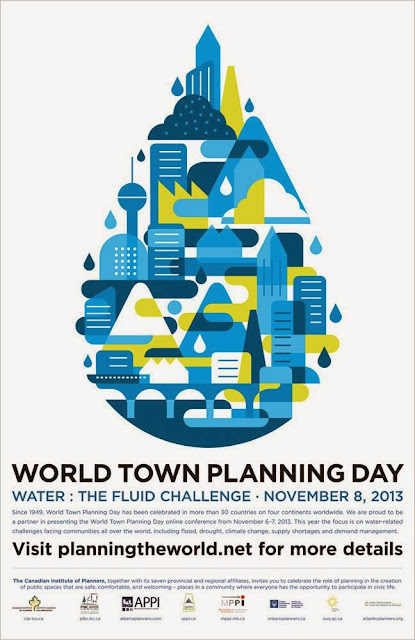